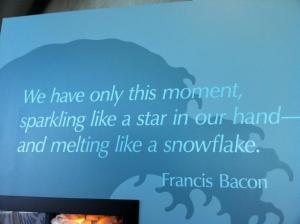 We went a bit ahead of the season and instead of a Fall clean-up, we did a Summer clean-up. Or change, for that matter.

Ricardo moved mid-August to share a home with a friend. Ian now has two homes and he is still adapting to this fact – as all of us, by the way. Not easy, I must say. I can see his confused emotions when he is with me but wish he was with Dad. Not that he doesn’t want to be with me, but he doesn’t want to be away from Daddy either! At some point, he told me that having two homes was way too confusing and he wanted just one, just to change his mind again saying that one home has a hot tub, so it is cool to have two homes after all. I am trying to show him that both houses are, in fact, ‘his’ homes. And we are just getting used to have the stuffies switching hands so often.

To add to his already full plate, swimming lessons twice a week, soccer once and French Immersion Kindergarten starting this week. I hope he can cope with such a busy schedule and has less meltdowns than the usual. Yes, because the terrible twos are still around, even after his 5th birthday!

If financially is being difficult, the physical separation was long overdue and we were ready to trail separate paths. Ricardo seems content with his new life. I am still organizing mine, but not less happy with the changes. Yesterday, with my son’s help, I was able to finally set up my crafts table, something that I brought from Brazil, in 2005, with the hope to keep painting and doing mosaics but never had the space or time to do so. The first two projects are on the go and Ian is a fantastic helper. As he said yesterday, while painting a side table, ‘this is fun!’

This blog is the result of what I learned during these difficult times and how I am grieving through my son.

Please note that some links you see in this site may be affiliate links. Every time you decide to make a purchase from these links, we will earn a commission – there are no additional costs for you. Please understand that we post affiliate links to companies we recommend and we think their products are helpful and/or useful for you.